Green beauties – the emeralds, precious stones of the world 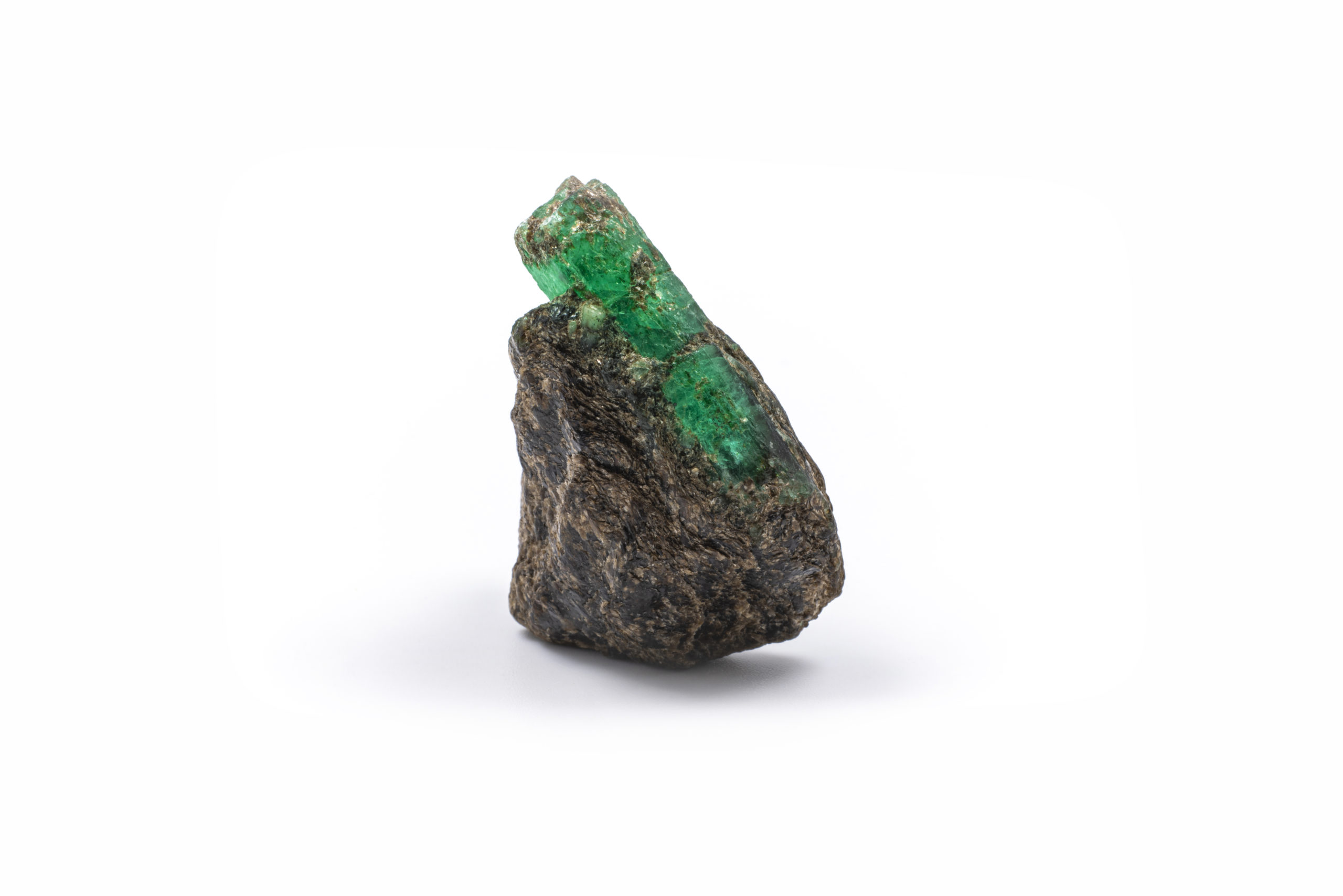 Emeralds are the green beauties among the colored gemstones. The rarity and beauty of colored gemstones makes them so valuable. Emeralds are masterpieces from the womb of Mother Nature, what is the special feature of emeralds? In conversation with gemologist and gemstone expert Dr. Thomas Schröck from Vienna in Austria.

The green gemstone is not only popular with the ruling families of days gone by, but also with jewelers and the collectors. „When people speak of „emerald“, they are referring only to the green beryl. The oldest known sites for emerald are in Colombia, but also in the Austrian Habachtal. For the most part, deep green specimens come from Zambia in Africa today. Deep green, clear specimens of emerald are especially sought after,“ explains Dr. Thomas Schröck, who has been at home in the international gemstone trade for over thirty years. His fascination was triggered by a rock crystal that his father brought him as an eight-year-old from hunting on the Austrian Felber Tauern. From that moment on, he first went to the Alps to „knock stones“ and later the hobby became his vocation. Today, the founder is managing partner of the company The Natural Gem in Vienna. The Austrian Dr. Thomas Schröck holds a doctorate in economics and is an internationally (including Switzerland, USA, India) trained gemologist. He is known throughout Europe as an expert in natural-colored, untreated gemstones and investments in them.

Already in ancient Egypt Cleopatra believed that the emerald was the only stone worthy of its beauty. But these rare crystals were also popular in the times of the Middle Ages. Hildegard von Bingen attributed special healing powers to the emerald. Dr. Thomas Schröck comments: „The colored gemstone emerald with its luminous green is one of the gemstones that has been valued by people for the longest time. Emerald was described as a gemstone as early as 1500 BC. Emerald belongs to the beryl group, but only the green variety is called „emerald“. Almost all other colors have their own names, for example „aquamarine“ for the light blue, „morganite“ for the orange-brown, „goshenite“ for the white variety of beryl. Especially in the time of ruling families, jewels set with emeralds were considered to indicate a special position of the wearer.“

The origin of the term emerald comes from the Greek word „smaragdos,“ which can be translated as „green stone.“ Even today, certain properties are attributed to this stone. Thus, the emerald is and was associated with fertility, immortality and rejuvenation. Nowadays, the rare gemstones can be found mostly in East African Zambia and Colombia. „In Zambia, the second largest deposit in the world was discovered around 1930. Emeralds from Colombia cover a wide range and are usually of high quality. Therefore, Colombia is nowadays the country with the largest turnover in terms of the rare gemstones. But emeralds are also mined in South America and in regions from South Asia and Russia,“ explains Dr. Thomas Schröck.

It is documented that the first emerald mines in the world were located in Egypt during the time of the pharaohs. French researchers discovered these mines in Egypt at the beginning of the 19th century. By the 16th century, numerous emeralds could also be mined in Egypt. Since this century, this source is no longer reliable, which is why other regions of the world have become more interesting for mining emerald.

In Austria, treasure hunters try their luck in the emerald mine Habachtal (of the Hohe Tauern, in the Pinzgau and Land Salzburg). „Habachtal is considered one of the most important emerald sites in Europe. Here, the rare crystals are said to be skimmed off in the rivers,“ Dr. Schröck proudly explains.

„Emerald green“ – The emerald fascinates with its liveliness

The emerald combines beauty, brilliance through an intense green color palette and belongs to the mineral group of beryl, which in nature usually appear as blue-green stones. A distinctive feature of emeralds is their brittle nature, which is why emeralds are often still treated in the mine. The beryl mineral family is known as the „mother of gemstones“ because of the sheer range of colors and shapes possible. „These discolorations occur when components of chromium, vanadium or iron are present when the gemstone is formed. Emeralds from Colombia are valued the highest, followed by gemstones from Zambia, Brazil and Russia. But stones that have at least a „no oil“, „insignificant oil“ or „minor oil“ listed in the certificate during treatment are most suitable for investment. The larger and the purer an emerald, the rarer it is. Clean, deep green stones weighing more than 5 carats are rare, no matter from which finding area,“ Dr. Thomas Schröck points out.

A special cut was created for the emerald, the „emerald cut“. Gemstone expert Dr. Schröck says: „Viewed from above, it represents a rectangle with beveled corners. The reason for this is that emerald is more porous and breaks more easily than ruby or sapphire, for example. Therefore, in this cut, the corners are beveled to prevent breakage. Besides that, oval or cushion cuts are accepted; for a round cut, you have to pay a slight premium, other cuts are traded at a discount.“

What is important when buying an emerald? „The stone should „live“; it should shine and sparkle. The greener an emerald (but without appearing black!), the fewer inclusions it has, the more valuable it is. Often emeralds have inclusions due to the process of formation in metamorphic rock. There is great heat and pressure in this rock. This is also the reason why most of these green gems are rather small. Large finds have a rarity value and are highly sought after. Emeralds are often described as particularly luminous gemstones, as their luster is silky, warm, or also called „green fire“. Inclusions are part of the emerald, this is the special feature known as the Jardin Garden. Skillful cuts highlight inclusions and at the same time bring out the special glow,“ explains colored gemstone expert and gemologist Dr. Thomas Schröck.

The most common imitations for emeralds are green glasses, which have a refractive index in the range of beryl due to additives. „Common imitations consist of compound stones, for example, as doublets of an upper part of colorless beryl and a lower part of green glass. Colorless beryls are joined together with green glue, and these fakes are common. Older duplicates have small bubbles caused by the two components being glued together. Almost undetectable to the layman, but the trained eye immediately recognizes fake emeralds, as well as worked colored gemstones. Sometimes cracked emeralds are processed so that they are no longer visible. In the past, colorless or green colored oil was used for this purpose, but it evaporated after some time. The cracks became visible again and the fraud obvious. Oil is still used – is also accepted. Resins are not desired and are not distributed by us. It also makes a difference whether it is crack or cavity filling. Today, certain resins are used which do not volatilize. If such a treatment step is not indicated at the time of purchase, it is a case of fraud,“ explains Dr. Thomas Schröck.

Certificates from independent gemstone laboratories and appraisers help to protect against imitations and fake gemstones. The expert’s tip: Trust is good, control is better, so when buying gemstones, look for certificates from independent gemstone laboratories and appraisals. The Natural Gem GmbH delivers each gemstone independently certified and with appraisal, from a court-certified expert with state award. The Viennese company specializes in trading and investing in the rarest and highest-quality gemstones and is regarded as an international contact partner for all aspects of natural-colored, untreated gemstones with a full-service approach: from initial information to advice and recommendation of an individual portfolio, to the discreet handling of the purchase and, in addition, the optimization and management of the investments. In addition, The Natural Gem also helps as the first point of contact for customers who are thinking about selling gemstones.

Eva Steinmetz is currently studying Applied Psychology (B. Sc.) at Apollon University of Health Sciences. Her interests are related to sports psychology in the context of martial arts. Furthermore, she has a good understanding of economic topics, as she has already gained experience in FinTechs. These were in the areas of insurance and financial services, which has given Eva Steinmetz a realistic insight into these industries.

Dr. Thomas Schröck, a PhD economist and trained gemologist has been a gemstone expert for over 30 years and is the managing partner of The Natural Gem GmbH, a company based in Vienna, Austria. The experienced Gemmologe and expert for gemstone investments wrote the work „Investing in precious stones: Money earning with the most beautiful things of the world“, publishing house edition a 2021, author: Dr. Thomas Schröck.